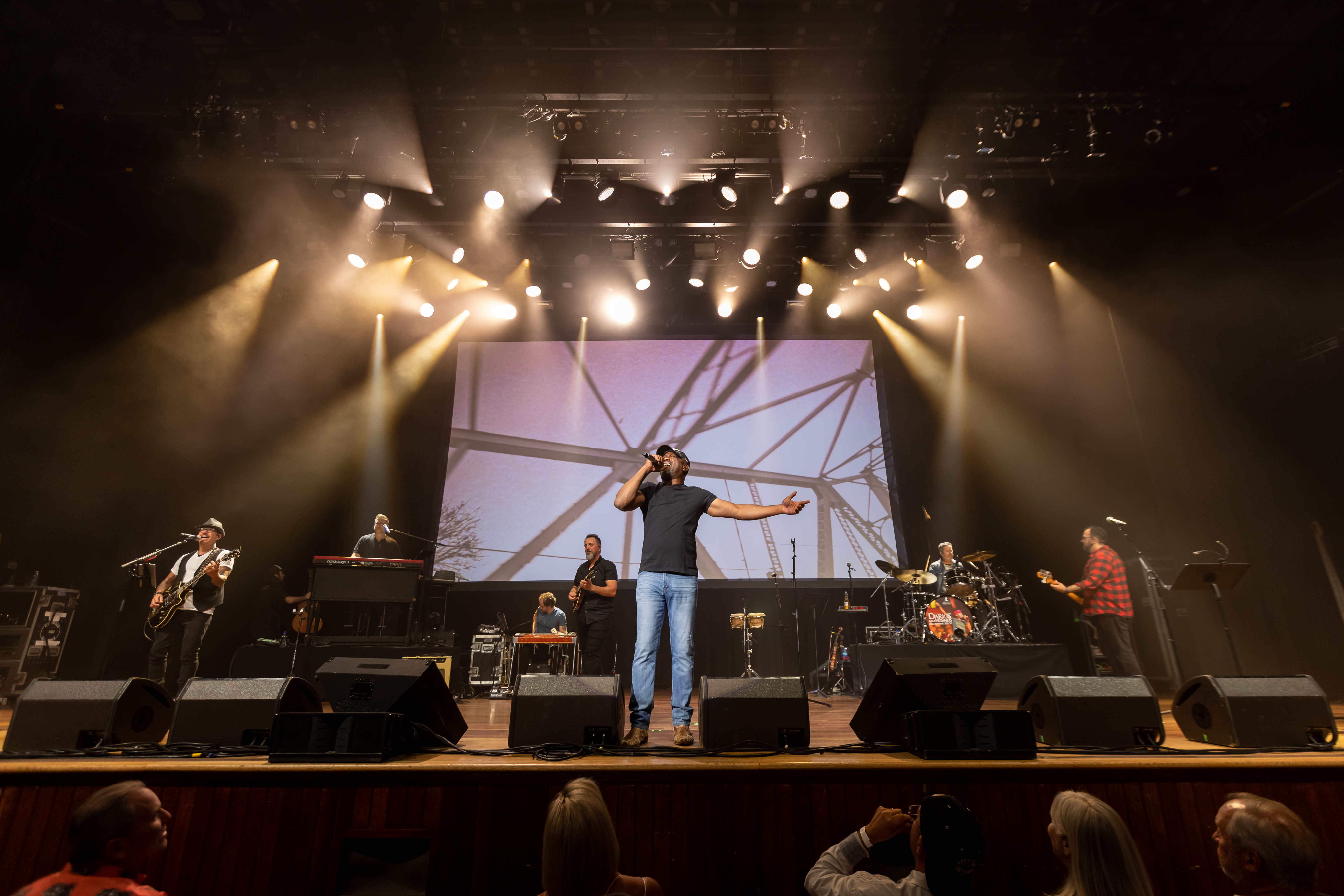 Nearly 15 years after first visiting St. Jude Children’s Research Hospital® where he was immediately inspired to pledge his support, three-time GRAMMY Award winner Darius Rucker continues to give back, surpassing the $3 million mark in his fundraising efforts with this year’s 13th annual “Darius & Friends” benefit concert on Monday night, June 6, which was followed by his corresponding golf tournament and silent auction on Tuesday, June 7. This year’s event alone raised an all-time high of $516,000, bringing together a sold-out audience at the historic Ryman Auditorium with at-home fans watching via live stream.
Reflecting on his first visit to the hospital in 2008, Rucker explained to the sold-out crowd, “I’m talking to one administrator and she said, ‘when you bring your kid to St. Jude, we fly you in, we put you up, we feed you and we never send you a bill.’ I started talking to people there and it’s true. That day I said, I want to do something to help. I’m doing this for St. Jude – thank you guys for coming out!”
Now, more than a decade later, that effort has become an annual tradition. The benefit concert, which serves as an unofficial kickoff to CMA Fest as fans descend on Music City each summer, is famous for its surprise lineup of stars and this year was no different. “Tonight is ladies’ night!” Rucker declared when kicking off the evening, setting the stage for a night full of 30 hit songs and beloved covers by Rucker and his friends: Sheryl Crow, Lindsay Ell, Sara Evans, Caylee Hammack and Rachel Wammack.
After a live auction and donation round which added thousands to the fundraising tally, the evening’s true purpose was on display as Addie, a St. Jude cancer survivor who was diagnosed with leukemia when she was 15 years old and has been in remission for five years, earned a standing ovation with her acapella rendition of “Never Be Enough” from “The Greatest Showman.”
Rucker kicked off the main event with a trio of hits – his Platinum-certified No. 1s “This” and “For the First Time” followed by his latest release, the timely “Same Beer Different Problem” – before introducing the first friend of the evening as ACM and CMA Award-winner Sara Evans took the stage to perform her enduring chart-topping hits “Suds in the Bucket” and “A Little Bit Stronger” before rounding out her set with a cover of Yvonne Ellman’s “If I Can’t Have You.”
Rucker then returned to the stage, thrilling the crowd with his Double Platinum-certified No. 1 “Alright” and Platinum-certified chart topper “Come Back Song” before introducing rising star and Muscle Shoals native Rachel Wammack, who performed her own “Bless Your Little Heart” and “Like Me” before thrilling the at-capacity crowd with a rousing rendition of Miranda Lambert’s Gold-certified “Little Red Wagon.”
The evening’s host continued the show with his hits “Homegrown Honey” and “If I Told You” as well as Hootie & the Blowfish classic “Hold My Hand” before introducing his recent Darius Rucker Live theater tourmate Caylee Hammack, who performed her debut single “Family Tree” and recent release “Forged in the Fire” before bringing the crowd to their feet with her rocking version of Johnny Cash’s “Folsom Prison Blues.” Rucker then returned to the stage, joining Hammack for a duet of his unreleased song “Never Been Over,” written with Brothers Osborne’s John Osborne and previewing what’s to come on his forthcoming album currently in the works.
Rucker kept the Hootie & the Blowfish nostalgia coming as he performed “Let Her Cry” accompanied by the chorus of a sold out Mother Church audience, before continuing the singalong with his latest No. 1 hit, “Beers And Sunshine.”
The Ryman audience then erupted with joy as Sheryl Crow took the stage, performing her Platinum-certified chart topper “If It Makes You Happy” and “Everyday Is A Winding Road” as well as being joined by Rucker for a poignant duet of “The First Cut is the Deepest,” with Rucker calling the “Darius & Friends” veteran “a true legend.”
Donning a white tuxedo jacket, he then performed a jazz section featuring Frank Sinatra’s “Summer Wind” and “Fly Away” backed by a brass quartet and his all-star band. He then introduced the final guest of the evening, with ACM and CMA nominated songstress Lindsay Ell bringing the crowd to their feet for an extended guitar solo during her performance of her latest single “Right On Time” plus “I Don’t Love You” as well as a remarkable cover of Stevie Wonder’s “Superstition.”
Rucker closed out the memorable evening with a rousing cover of Amy Winehouse’s “Valerie” as the show then ended according to tradition, with Rucker joined by the sold-out Ryman crowd for a “Wagon Wheel” singalong, the feel-good energy throughout the auditorium symbolic of the night as a whole.
This year’s milestone fundraising event adds yet another successful page to the decade-plus history of “Darius & Friends.” Prior guests have included Lauren Alaina, Jason Aldean, Brooks & Dunn, Brothers Osborne, Luke Bryan, Luke Combs, John Daly, Charles Kelley of Lady Antebellum, Ashley McBryde, A.J. McLean of the Backstreet Boys, Brad Paisley, Kenny Rogers and Tommy Thayer of KISS, among many others.
The annual fundraising event, made possible with support from generous sponsors AMD, Hendrix Enterprises, CDW, Intel, Fanatics, Hewlett-Packard, CAA and Arrow Electronics, helps ensure families never receive a bill from St. Jude for treatment, travel, housing or food – so they can focus on helping their child live.
Fans can also continue to donate to St. Jude in honor of “Darius & Friends” HERE.