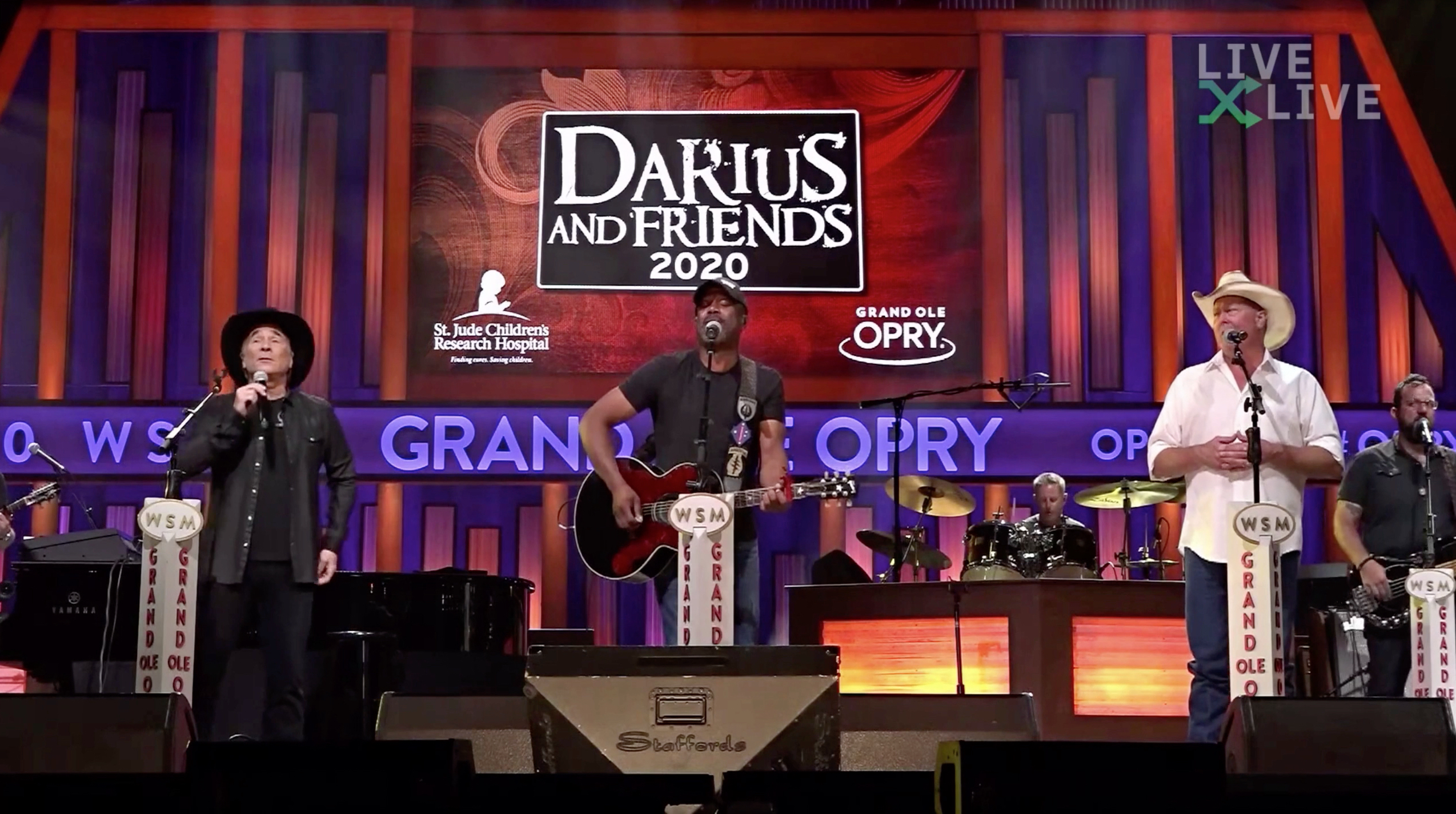 Darius continues to give back to St. Jude Children’s Research Hospital, with the Thursday, July 30 live-streamed edition of his annual “Darius & Friends” benefit concert raising over $255,000 and adding to the event’s overall total of more than $2 million.
“When we first started talking about this year’s concert, which usually takes place during the week of CMA Fest, I had the idea to make it a really fun night of ’90s Country,” shares Rucker. “Even though gathering in person for our normal show wasn’t possible this year, we still wanted to do as much as we could to support the great work happening at St. Jude. I’m so thankful to my friends Clint Black and Tracy Lawrence for helping that ’90s Country vision still come to life, and to the folks at LiveXLive for bringing this concert to everyone’s screens at home.”
Broadcasting from the iconic Grand Ole Opry stage and hosted by WSM’s own Bill Cody, the event began with a moving video package from the hospital known around the globe for treating childhood cancer and other life-threatening diseases before Rucker kicked off the evening’s festivities with his chart-topper “Alright” and his most recent No. 1 hit “For The First Time.”
Pausing to reflect on the impact of how St. Jude cares for families who face the heartbreaking reality of having a child diagnosed with cancer, Rucker then introduced his first guest of the evening, noting “it’s always special when you meet your heroes and they’re everything you imagined they’d be.”

Strolling on stage to a smattering of applause from Rucker’s band, The Carolina Grey Boys, Black shared his trademark sense of humor as he remarked on the missing Opry House audience before treating fans watching at home to his new single “America (Still In Love With You)” and his chart-topping hit “A Good Run of Bad Luck.”
Rucker then returned to the microphone to share the story of earning his first No. 1 at Country radio with “Don’t Think I Don’t Think About It” and followed that with yet another chart-topper in “If I Told You.” He then entertained fans with the debut performance of his forthcoming single, “Beers And Sunshine,” and “a pretty good song to be playing with everything going on right now,” his Hootie & the Blowfish smash hit “Hold My Hand.”
Next on stage was multi-Platinum artist Lawrence, who performed his No. 1 hit “Find Out Who Your Friends Are” before inviting Rucker back to center stage. “I’ve played this song in my set for probably 14 years, so this is really special,” noted Rucker as the two joined forces on three-week No. 1 “Time Marches On.”
Rucker then treated fans to a final solo performance with “Come Back Song” before the evening ended according to tradition, as the three artists came together for a high-energy “Wagon Wheel” singalong to close out the show.

Throughout the successful history of “Darius & Friends,” prior guests have included Lauren Alaina, Brooks & Dunn, Kane Brown, Luke Bryan, Sheryl Crow, Ashley McBryde, A.J. McLean of the Backstreet Boys, Brad Paisley, Kenny Rogers and Paul Stanley of KISS, among many others.
The annual fundraising event, made possible with support from generous sponsors CDW, Intel, PNC Bank, Cigna, Hendrix Enterprises and Delta Dental of Tennessee, helps ensure families never receive a bill from St. Jude for treatment, travel, housing or food – because all a family should worry about is helping their child live.
Rucker, who will again perform live from the Grand Ole Opry on Saturday, August 15 for the 4,937th consecutive Saturday night broadcast of the show, is also set to release new music with feel-good summer single “Beers And Sunshine” making a world premiere at Country radio this Thursday, August 6 and available everywhere on Friday, August 7.
For more information, visit www.DariusRucker.com and follow on social media @DariusRucker. Fans can also continue to donate to St. Jude in honor of “Darius & Friends” HERE and photos from the live stream powered by LiveXLive are available HERE.