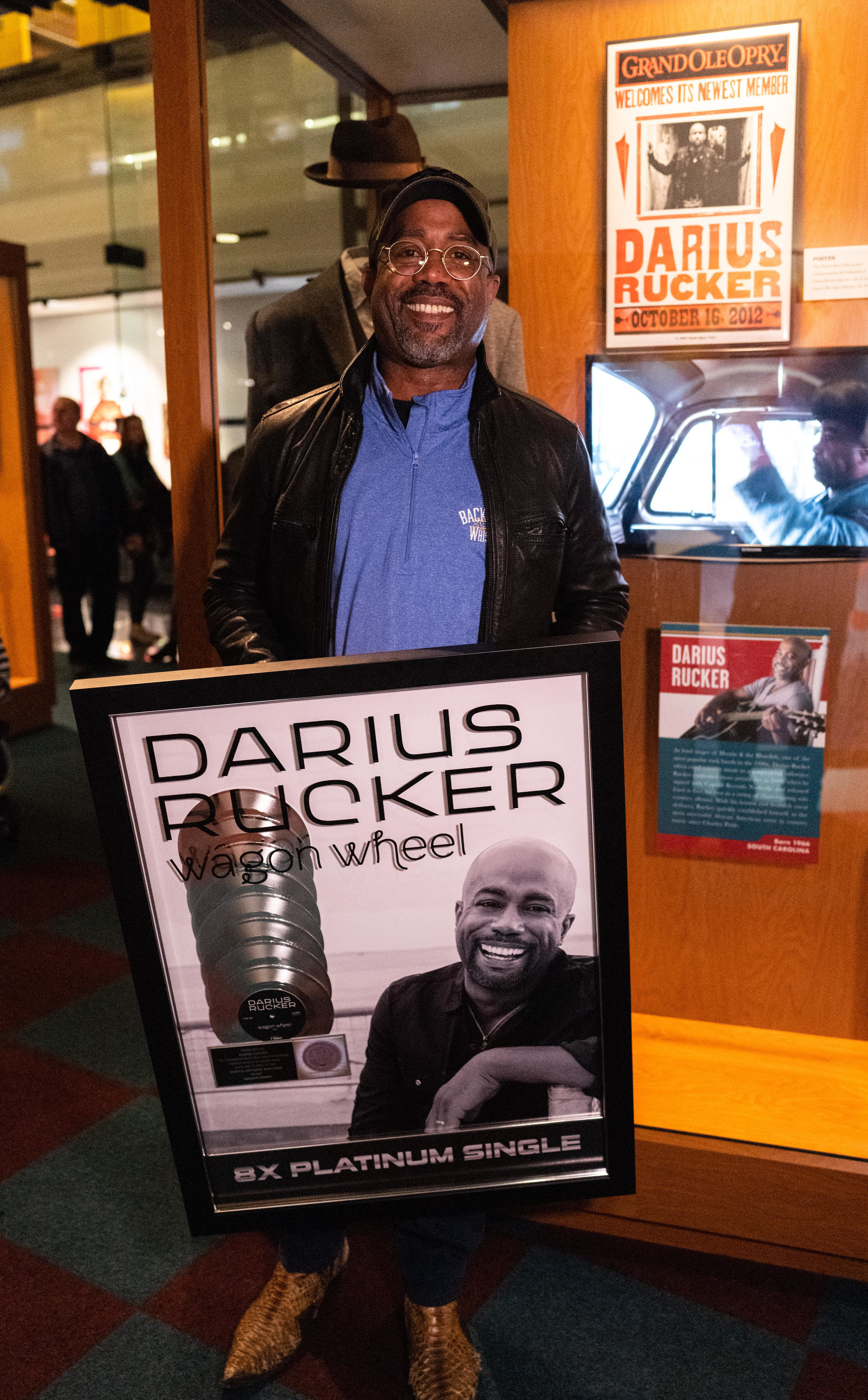 Capitol Records Nashville’s Darius Rucker was surprised with a plaque celebrating the RIAA’s recent 8x-Platinum certification of his hit song “Wagon Wheel” during a visit to the Country Music Hall of Fame & Museum yesterday, February 12. Since topping the charts for back-to-back weeks in 2013, “Wagon Wheel” has now become one of the top five best-selling Country songs of all time and Rucker is now the only solo male country act to achieve the honor of an 8x-plus multi-Platinum song in RIAA’s history.

Lured under the pretense of seeing his exhibit at the Country Music Hall of Fame & Museum, Rucker was surprised when he rounded the corner to see his record label of 14+ years, UMG Nashville, holding a plaque. “What are y’all doing here?!” Rucker remarked, taking in the presence of label heads and esteemed industry guests from the RIAA gathered around his exhibit, which features the suit he wore in the “Wagon Wheel” music video alongside other memorabilia from his remarkable career. After hearing the news – and pausing to really read the plaque’s inscription – an in-awe Rucker added, “I don’t believe you. I don’t believe this! Wow, what a testament to the fans and their love of Country music.”

“Wagon Wheel,” originally released by Old Crow Medicine Show in 2004, was written by the band’s lead singer, Ketch Secor, and was based on a sketch by Bob Dylan, who is credited as a co-writer. The single was featured on Rucker’s Gold-certified, No.1 album True Believers and has since accumulated over 960 million global streams. “Wagon Wheel” also won a GRAMMY for Best Country Solo Performance at the 56th Annual GRAMMY Awards, the third of Rucker’s career.

“Even in my wildest dreams for ‘Wagon Wheel,’ the singer was never me or Bob,” remarked Secor upon learning of the song’s new accolade. “It could have been a lot of different people who had the big hit with it. It could have been one of those perfect-smile guys with the made-for-TV personalities. That it was instead a salt of the earth singer like Darius is something divine I’ll leave to the theologians to figure out.”

Mike Dungan, UMGN Chairman & CEO, recalls the conversation he had with Rucker when he first decided to record the song: “Darius called my cell phone one night and told me that he was in the audience for the talent show at his daughter’s high school. He said, ‘Hey man, do you know that song ‘Wagon Wheel?’ I just watched a band full of kids perform it, and it reminded me of how great that song is, and I want to cut it.’ I said, ‘you’re crazy,’ to which he said, ‘well I’m cuttin’ it! I’ll talk to you later!’ We (the label) thought that this was going to either be huge… or a disaster. He was right, everybody’s happy, life is good!”

“On behalf of RIAA, we’re so pleased to mark such an amazing accomplishment,” said Jackie Jones, Vice President of Industry Relations at the Recording Industry Association of America. “A certification of this magnitude is incredibly rare—occurring only a few times in our organization’s history. Darius, his team and the entire UMG Nashville family should be very proud of this historic moment in music.”